The Sport Forum at the CSIT Congress is this time focused on the hot topic "Covid 19 - What's Next?

CSIT YOUAca Project - Together we are stronger

The first Online-meeting of the YOUAca EU-project was a full success.

show more zu CSIT YOUAca Project - Together we are stronger

The launch is approaching, and the BRIDGES team is ready to welcome you The question is ARE YOU ...

Do you know what is going on on the picture? Check our Facebook and LinkedIn news and find out! ... 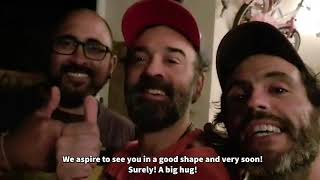 Noting his experiences and presence in the workers sport programs, Dr. Hoseini emphasizes that sport plays a vital role in creating motivation and incentives for human force and retirees. In addition it has also several other roles in synergistic and efficiency of human force and everybody should support this fact.

Dr. Rabie thanked Mr. Hoseinzadegan, the first president of AFWSI, for all his commitments and efforts and mentioned him as one of the precious member of the Ministry of Labour, Cooperative and Social Welfare who revived the workers sport with his plans and programs. He wished him all the best for his new and indeed important professional challenge.

Noting the crucial role of Joy and happiness among families, the Minister of Labour, Cooperative and Social Welfare added that they should use and benefit the company’s potentials in creating social happiness among the workers society by moral and financial supports of workers sport.

In this session, Haidarian, Social and Cultural Deputy of the Ministry of Labour, Cooperative and Social Welfare, outlined the strategic planning of workers sport. Pointing out the Prudence and Hope Government’s approach, Rouhani’s Government, in social services sections, he added that sport plays fundamental role in improving life standards of people, especially workers society and with more investment in sport we can decrease high costs of treatment.

Dr. Amir Hoseini noted that one of the determined strategic planning of AFWSI is the minimum 150 minutes of sport and physical activity per week. He also added the AFWSI should utilize all its potentials and opportunities in international level for workers sport, like ECO, to get out workers sport from being very conservative and seclusion. One of other AFWSI priorities is to improve and activate the workers League by using the workers themselves and their family members.