In just a few years, a small initiative in Israel has become a now global application that has captivated thousands of women around the world.

2023 World Sports Games in Rome - and after ? Where are we going ? Decision in adavance!

CSIT is growing permanently, even during times of Corona - or maybe because of...

Inclusion - an important topic at CSIT

Since the WSG in Lignano 2015, the CSIT has been awarding the Green Card for special and exceptional sporting behaviour.

This week the official logo of the EU project Sport for all Genders & Sexualities was publishedT This is a great opportunity to present the team of project partners.

This week, the YOULead Booklet has been published. It gives ideas and methodological tips for organizing youth sports games.

In just a few years, a small initiative in Israel has become a now global application that has captivated thousands of women around the world.

2023 World Sports Games in Rome - and after ? Where are we going ? Decision in adavance!

CSIT is growing permanently, even during times of Corona - or maybe because of...

Inclusion - an important topic at CSIT

Since the WSG in Lignano 2015, the CSIT has been awarding the Green Card for special and exceptional sporting behaviour.

During last week's CSIT Single Championships in Italy, the team of YOULead had the chance to finally present their outcomes in front of the CSIT ExCom.

After the meeting on Friday, the CSIT ExCom went on an emission-free inspection tour by bike on Saturday.

Opening in Cervia and Cesenatico

The CSIT Singles Championships were officially opened in Italy on Thursday

The Korean Organisation KOWSC is one of the two applicants for the CSIT World Sports Games 2025.

This week, CSIT Single Championships in Mamanet, Gymnastics and Beach Soccer as well as the CSIT ExCom Meeting will take place in Italy at the same time.

MundialEU comes to an end

On Saturday, May 28th, the project teams of the EU co-funded project MundialEU met for the first and last time in Ostia Antica near Rome, Italy.

The CSIT member association KOWSC-Korea Office Worker Sports Committee from South Korea has submitted a bid for the 2025 CSIT WSG Games together with the cities of Daegu and Gyeongsangbuk-do.

Sport for all Genders and Sexualities: Call for Recruitment of a European Evaluator

The fairplay initiative at VIDC is looking for an external evaluator for the European Commission funded project “Sport for all Genders and Sexualities - Tackling Sexism, Trans- and Homophobia in European Grassroots Sport” (SGS).

show more zu Sport for all Genders and Sexualities: Call for Recruitment of a European Evaluator

Greece - On the trail of the Olympic Rings - Candidate WSG 2025

The Greek sports federation HOCSH has applied with the city of Loutraki to host the CSIT World Sports Games 2025!

President Bruno Molea was a guest at the ASKÖ National Convention in Austria.

Registration for Italy is open - Three Cancellations in Finland

In 2022, CSIT is again involved in a number of EU-co-funded projects despite the still prevalent pandemic.

International Day of Sport for Development and Peace

April 6 was declared as the International Day of Sport for Development and Sport (IDSDP) by the UN General Assembly in 2013, creating a historical link to the first modern Olympic Games in 1896

The 12th CSIT ExCom Meeting will take place in Israel from 17 to 20 March.

Events 2022 under the Patronage of CSIT

Besides the CSIT Single Championships 2022, CSIT will take over the patronage for two events in Misano Adriatico, Italy and Timimoun, Algeria.

show more zu Events 2022 under the Patronage of CSIT

STOP the War in Ukraine!

CSIT statement against the war in Ukraine:

There is a large variety of CSIT Single Championships in 2022. Register now!

Get your travel insurance for the upcoming CSIT events 2022

The CSIT will also take disabled sports into account at future events and will already offer a corresponding programme at its next CSIT World Sports Games in Rome in 2023.

In 2022, CSIT is again involved in a number of EU co-funded projects despite the still prevalent pandemic.

CSIT's leaders will be present at all Single-Championships in Italy

CSIT survey on the further development of the WSG

PLAYInc ends with a bang

Just before Christmas the Final Conference of the EU co-funded project PLAYInc took place in Savignano sul Rubicone, Italy. Besides work meetings the project leader AroundSport organized a unique closing event to celebrate the impact of PLAYInc on the local community.

On Tuesday CSIT President Bruno Molea was elected as chairman of the GAISF Associate Members Group and will be one of the nine members of the GAISF Council.

At the ONLINE Congress in Rome

Important decisions were made for the coming years in CSIT

show more zu At the ONLINE Congress in Rome

Numerous Olympic and Paralympic participants have their roots in CSIT member federations!

A major topic at the CSIT Congress was the increasingly important issue of environmental sustainability at international sporting events.

After the cancellation of the WSG 2021, there were intensive discussions about the organization of the upcoming CSIT World Sports Games.

Amendments to the CSIT Statutes

Recent global developments in a wide range of areas have also necessitated changes to the CSIT Statutes.

The cancellation and postponement of numerous sporting events has created uncertainty in the large sports community worldwide as well as in CSIT.

Currently, the CSIT has more than 50 member associations from more than 40 countries with more than 200 million individual members and 35 partner organizations

CSIT as a platform for new ideas

show more zu CSIT as a platform for new ideas

Restructuring of the Technical Commissions

The CSIT Sports Commission is currently working intensively on a re-organization of the Technical Commissions (TCs) of the specific sports.

The participants of the CSIT Congress in October were given an overview of the past, current and upcoming EU co-funded projects of CSIT.

After 2 years of inactivity, the CSIT Youth Programme starts again with the YOULEAD project.

The course for 'Physical Activity for Seniors 55+' took place in Schielleiten, Austria, in September

In mid-September, the first "physical" meeting of the new EU project PLAYInc took place in Tarragona.

Cup of the President of Ukraine

On August 21, the Palace of Sports in Kiew hosted a hand-to-hand combat tournament for the Cup of the President of Ukraine

show more zu Cup of the President of Ukraine

Due to the postponement of the CSIT WSG from June to October 12-17, 2021, the registration deadlines for the games have also changed.

On 18 June, the Mayor of Cervia, Massimo Medri, the Councillor for Sport, Michela Brunelli and CSIT President Bruno Molea presented the CSIT WSG2021 to the press in Cervia.

The WSG2021 presentation took place at the Grand Hotel Cervia, which will be the headquarters of the organizing committee EMILIOC for the CSIT WSG2021.

The Opening Ceremony of the 7th CSIT WSG 2021 and the “3rd World Amateur Sports Forum – Sport Impacts All” will be held on the same day for the first time!

CSIT holds its next Congress on October 11th at the site of the CSIT World Sports Games in Cervia, which are scheduled for October 12th to 17th, 2021 in Emilia Romagna.

Cervia - The heart of the 7th CSIT World Sports Games

With the CSIT WSG2021 in October, the Italian summer will be extended by one month

7 September, World Fair Play Day in Budapest - Who will manage to reach 1275 km

Training young people through intergenerational dialogue and learning by doing: the project led by CSIT continues. Participants will now have to map good practices in the field of sports camp organization.

CSIT is looking for competent sports experts, who like to use their knowledge and skills to advance the CSIT in serving international amateur sport!

CSIT has a lot of values that are not just merely connected to sports. We are always striving to promote equality, enhance cultural exchange, force inclusivity and show our social responsibility.

IFBT is pleased to announce the European Beach Tennis Championships which will be held in Barcelona from the 5th to 7th November.

Due to the postponement of the CSIT WSG from June to October 12-17, 2021, the registration deadlines for the Games have also changed.

"Sport, Peace & Development" - 100 years of CSIT - a fascinating book about the history of CSIT's origins

Futsal as social inclusion in Tortosa

BRIDGES projects are useful tools for social cohesion and interculturality

New EU Project logo - DONE ????? This week the official logo of the EU project Sport for all ...

The SGS (Sport for all Genders and Sexualities) has already shown the first important steps in the ...

The summer 2022 highlights with our very own CSIT Single Championships in various sports ...

Registration still open ?? CSIT Swimming Championships ? The journey of CSIT is not over this year, ...

The CSIT Single Championships journey did not end in Italy! In the end of August, we, together with ...

It?s been a week since we said bye to Cervia and Cesenatico and all of our Mamanet, Beach Soccer ... 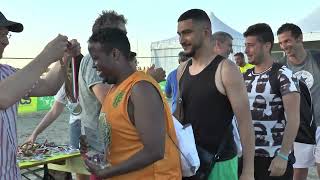 That was the CSIT Gymnastics, Beach Soccer and Mamanet Championships 2022 in Cervia & Cesenatico, ...

The Single Championships are over and we are still under impression ? Thanks to our partners ...

The CSIT Swimming Championships 2022 will take place in Oulu / Finland and will be organized by our member TUL! Find more information on the CSIT Single Championship Subpage and in the Download Centre! For our international events, we advise you to proper insure your participants (accident, standard health, Covid-19 related)!